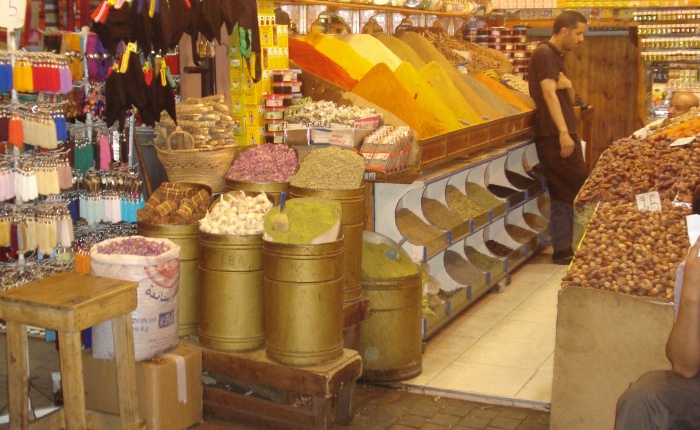 The afternoon sun beats down, high in the hazy sky, masked by a thin veil of sand, like the faces of the women who walk mutely past, hidden by the abaya. Against the backdrop of the mighty Koutoubial mosque, with the dusty smell of desert air and the twang of an Arabian beat on the radio, the visitor to Marrakesh is at once transported back several centuries in time, where the townspeople gather to sell their wares in the marketplace and black crows circle menacingly overhead.

The beeping of a scooter and splutter of a car exhaust is enough to jolt anyone back into modern day Marrakesh, where it is unusual to see the women so completely covered up. The sombre black Arabian abaya that leaves only a narrow space for the eyes is traded, in the most part, for a fashionable pair of jeans and some kind of light fabric to cover their hair, styled up with flashy fashion accessories.

On the street outside, a young girl with over-sized dark sunglasses and a Gucci headscarf clings to the backseat of the bike, as her male companion stretches out a leg to slow down, narrowly avoiding collision with a donkey and cart, laden high with carpets.

A loud speaker cranks into life, penetrating the air with its bleating call that cuts through the hustle and bustle for a moment. “Allah Akbah” (God is good) it wails, as the Imam summons the men to worship for the third time that day. They stop what they were doing and flock towards the mosque, leaving their sandals in a huge pile outside.

It’s hard not to feel a little daunted when entering the Place Jamaa el Fna at the gateway to the souks. Souks (if you didn’t know) are Arabic markets selling any kind of wares you can imagine, from live animals to fresh vegetables, antiques and modern electronics, I-Phone holders and belly dancing outfits.

Pungent aromas of a thousand varieties of perfumes pressed from exotic flowers and berries invade the air, mingling with deeply aromatic herbs and spices, piled high in vibrant reds, yellows and oranges. Lovers of hot food will quickly fall in love with “harissa” a Moroccan chilli as common as ketchup that makes the tongue tingle and the chest burn with its heat.

Leather bags, shoes, glass works, ceramics, carpets, candles, paintings, hardware items and fake football T-shirts from every country around the world; almost anything the heart desires is on offer in the souks at prices to fit everyone’s budget and haggling skills.

Nothing has a ticket and the initial selling price will correspond proportionally according to how uncomfortable you look, what language you speak, and how much of a cool head you can keep. A poker face is an absolute must. Appearing completely disinterested and noncommittal also helps the Dirham come tumbling down.

The heaving market square steams with palpable intensity, as every merchant that passes fights for the wandering tourist’s attention, signalling, whistling, waving and even grabbing to come into their stores, flashing sinister smiles that quickly evaporate into loud curses when they fail to make a sale.

It can be hard to maintain composure as 360 bedlam unfolds before your eyes. Narrowly escaping the clutches of a beduin with a camel who wants to pose for a photo can lead you to fall straight into the path of a snake charmer, cavalierly circling his serpent uncomfortably close to your face.

For a brief respite from the intensity of the souk, tourists can head to any of the numerous cafes bordering the plaza where they can sip on Moroccan tea or simply replenish their water supplies. None of the restaurants in this area of Marrakesh serve alcohol as it is illegal within 100 metres of the mosques dotted about the corners of the plaza, so an ice cold beer to quench the thirst is unfortunately out of the question.

Looking down from the vantage point of a balcony at the bizarre melange of competing characters is an excellent way to get your bearings and drink in the sights and smells around you. Bewildered tourists and quick-witted merchants, men and women dressed head to toe in traditional costume next to German tourists with bare shoulders and legs, donkeys and carts barely avoiding the people as they whiz past without reducing their speed.

Snake charmers teasing slippery creatures out of baskets with the mesmerizing sounds of their pipes, fiercely persistent tattoo artists, traders, touts and street performers all mingle with beggars that spit and curse at those who refuse to give.

A trip to the souks of Marrakesh is not for the fainthearted. Pushing firmly past people, learning the correct tone in which to announce a loud and firm “no” and an enthusiasm for playing them at their own game will see the locals begin to break upon your determination like waves against the shore.

The more you look like you know what you are doing here, the less they will approach. Years of experience has taught them to instantly smell both fear and money and they are quick to hone in upon the twitchy blond tourists with guidebooks, or elderly foreigners with furrowed brows, clutching their maps in hand.

The mysterious sounds of Middle Eastern music wind out of the individual stalls, the mesmerizing notes dance on the air, mingling with the inimitably strong smells of leather, fried beef, and perfumes that mask the body odor for the most part (although all the layers of clothing, steaming foods bubbling out of little carts and portable stoves, throngs of people pressing together and a searing afternoon heat make the stench of sweat unavoidable at times).

As you enter into a tunnel of fabrics of authentic clothing, belly dancer costumes and curtains of silver and beads that chime and rattle as you pass, the souks become increasingly inviting and seducing.

Tiny cafes about two meters wide are filled with men playing cards amidst a rising halo of smoke from their cigarettes and the hookah pipe. Health campaigns about the ills of tobacco apparently haven’t reached these lands and any establishment you enter (including the airport) you will do so to a cloud of smoke.

Women busily make khoubz, round flat breads typical in Morocco, beating the dough hard against the surface and flipping it up into the air. A mouth-watering aroma emanates from a little counter covered in tajines, the national clay dish in which almost all of the traditional meals are served, from cous cous, to spiced chicken, beef and vegetables.

A large-bellied man leans against a small stall, conversing loudly with its owner who stirs something briskly in a steaming, bubbling pot. Talking with your mouth full is quite common here and scenes like this can fascinate the viewer, as they simultaneously eat while tossing snail shells onto already large piles forming on their plates.

Skinny young boys rumble past, pulling carts full of impossibly sweet, crystallized pastries and candies of all different colors, pinks, greens and reds, topped with pistachio nuts and chunks of sticky nougat. A mother with a baby strapped to her back in a blanket walks by and all the while you are invited to come into each seller’s stall.

As the sun starts its descent in the desert sky, tingeing the walls and doorways with pink, the souks take on a different aspect, as you wind further inside the labyrinth, turning a corner that is suddenly quiet and ducking under a hidden little archway that leads deeper and deeper into the network of alleyways and away from the heavy streets and sellers behind.

The detail of the carvings and paintings on the bricks are so well preserved, with archways covered in elaborate tiles and beautiful Arabic patterns. The noise of the souk above is muted, the hustle and bustle paused as you hide below the mayhem in one of the city’s underground arteries and let your imagination run wild contemplating the centuries of history and people that have passed through these lands.

There is such a powerful energy about Marrakesh; the backstreets of the Media contain the whisper of the desert and the souls of its ancestors, hidden within these walls. This is definitely a good place to get lost in.