Still fresh in our minds is the memory of the horrifying journey to get here. For most of the journey the speedometer nudged 170k and the driver
slowed down only once to point out a dead body on the roadside, lying beside the mangled wreckage of a car.

So, less than 24 hours later, contemplating the world’s smallest plane (with just 5 seats) and a pilot with alcohol on his breath, I started to wonder if we are not being just a little irresponsible.

The engine splutters into life and we racket along the runway, finally ascending the open sky. I’ve never experienced flying in a plane with the windows open before. There are boxes of coke cans under my seat and the controls just in front.

The scenery is stunning and we feel every whisper of breeze and shuddering of the plane’s wings. Mystic and brooding tepuis (flat table mountains) and roaring waterfalls fill the windows. It’s exhilarating. 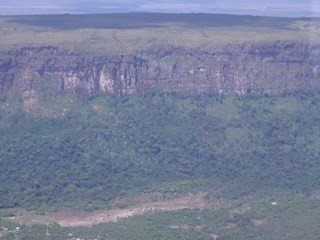 Canaima (the town closest to the falls) could possibly be one of the most striking places on earth, with waterfalls pounding into a lagoon with a reddish tinge to the water, caused by an agent in the soil. The first day of the trip we will not see the falls, but progress up the river in a wooden boat and visit lagoons and smaller falls along the way.

Our party comprises the two of us, a late-middle aged couple from Aruba – Baba and his wife – and three elderly Venezuelan ladies. We have not chanced upon the party trip. The camp is basic in the extreme and when we arrive after dark, soaked through to the skin after a long journey upstream in driving rain, there is no electricity.

There is also no alcohol and our cigarettes have been sacrificed to the elements and are limp, wet and broken. There seems little to do after we have eaten and we crawl into our hammocks at about 8.30. The deafening throb of crickets and other cries from the surrounding wilderness feed my over-imagination and the most sleep I can snatch is in periods of minutes
and marked by curious lucid dreams.

The camp´s dog decides to plant itself directly beneath my hammock and begins to lick its bottom and scratch its fleas into my ear. Not wishing to disturb my fellow hammock dwellers, my feeble whispers of “shew, shew” go unnoticed. The dog stays put. I am forced to resort to some loud expletives and slapping movements with my hands, which provoke a gnashing of teeth and a hurt whimper as the mangy creature limps off.

Stiff and weary at about 6.30am, we cannot bring ourselves to get under an icy cold shower and we pull on the still-damp clothes from the day before. I ponder what effects of sleeping in a banana shape are having upon the elderly among us. They are beginning to look a little worse for wear and bleary-eyed.

We pack ourselves onto the boat and make our way upstream to the falls. We have to cross several rushing rapids on the way up, which pound the boat and scratch the motor. I´d always wanted to try white water rafting, but I´d supposed it would be in a raft. Not in a beaten-out, over-sized canoe. The trip up the river is a test on our aching bottom and back muscles, as the wooden bench offers not one once of comfort. The life vests now double up as seat cushions and the lesser-able begin to look progressively more peaky and grey.

But the thick, green vegetation and rushing red river, peppered with frothy white rapids, keep our minds occupied. At last we catch a glimpse of the falls, obscured by the dense jungle, tall, proud and imposing. It is now that our group splits into two – those who will tackle the hike to the falls, and those who will wait at the bottom. It is not particularly strenuous, but littered with thick tree roots and low-hanging branches. The path becomes increasingly steeper as we advance to the falls and the insects more bountiful, as we slap and shriek and swish our way up.

Suddenly they are revealed. Staggeringly high and pouring into the lagoon at their feet. The beauty and impressiveness of the Angel falls is not in the volume of water, thundering angrily, like Niagra, but more in the sheer size and staggering steep height.

Bathing in the icy-cold pool at the bottom and staring up at the cascading water is a phenomenal, almost sobering experience. We sigh contentedly before hiking back down to a hearty lunch of chicken and mashed
potatoes.

On the return to the camp, the rain sets in and doesn’t stop for the next 15 hours. Volumes of water dumping from the sky, relentlessly bashing us in the little boat. Our party are looking fairly grim. As darkness falls, the thunder and lightning become increasingly aggressive. We spend several hours playing cards to pass the time until we can sleep. Both of us are now bored and more than ready to leave the jungle and see some civilization. Its getting desperate.

We are now scraping for ways to entertain ourselves, inventing new games, such as – how many life vests can you put on in under a minute – and – how many games of shithead can we play before losing the will to live.

Staring out at the ceaseless rain and unbroken darkness, it does feel as if even God himself has forsaken this land. Even the dog has jumped ship. It
literally flung itself into the river and swam for freedom. That night I sleep even less, as images of flash floods causing land slides fill my brain and I am convinced the camp will be washed away.

As we load our aching bones onto the little plane once more, it is with enthusiasm. This time to satisfy our overwhelming desire for a decent shower, massage, and general de-jungling session. I ache to see a car.
Hear the sounds of a city. Drink a beer. Neither of us are jungle girls. We both have a pair of high-heel shoes in our backpacks. It is time to hit the
dance floors of Brasil. The southward journey continues…